Last month, someone gave my husband a gift of backyard pears. When we’d eaten all but a few, I decided to look for a recipe to use the remaining fruit.

I found directions for pear clafoutis on Orangette, a blog I’ve mentioned before, by Seattle restaurateur and author Molly Wizenberg. 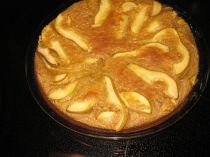 Here’s what I like about clafoutis: it’s French, it has fruit, and it sounds exotic, even though it’s not a fancy dessert. It’s more like a dense, baked pudding.

I’d only attempted one once, more than twenty years ago, and I remember being disappointed in the result. But what I discovered this time is that it tastes much better after a couple of days. Maybe the flavours need to meld.

I used almond milk instead of whole milk, and I didn’t bother peeling the pear. I cored it with a melon baller, a neat trick I read about somewhere, a long time ago.

I also used an immersion blender in a mixing bowl, instead of a regular blender.

Like Wizenberg, I liked it as a dessert after breakfast – in my case, two days after I baked it, at a friend’s.

Every year, after Passover, I have leftover coconut that sits in my cupboard until the following year. I love homemade macaroons for the holiday, but don’t think to make them during the year.

Last month, as part of an attempt to be organized and use ingredients on hand, I tried a decadent coconut tart recipe that I found online.

It’s from a blog called Orangette, by Seattle restaurateur and author Molly Wizenberg. I tweaked the recipe just a bit. Wizenberg had already put her own spin on it, after finding a macaroon tart recipe in Super Natural Every Day, a cookbook by Heidi Swanson.

I think the best part is the fruit hidden under the coconut crust. It’s tasty, balances the richness, and ups the nutrient content. This time of year, when fruit is at its freshest, is a perfect time to try the tart. 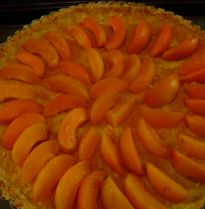 Wizenberg adapted the recipe to make it gluten-free, but I opted for a mix of half white and half brown rice flour, which lowers the gluten content but doesn’t eliminate it.

I used a star anise-flavoured sugar, because it had also been in my kitchen for a long time (sigh!). I also reduced the butter from 10 tablespoons to 8 (1 stick), because – to be honest – I couldn’t bring myself to use that much butter. The crust was still melt-in-your-mouth rich, but the tart was a bit hard to slice.

A bonus: it looked pretty because of the fluted tart pan.

I wondered if it would freeze well, so I put a small piece in the freezer overnight after Friday night dinner. It was still delicious the next day.

The recipe can be found here.