Last week, I came across a recipe for vegan chocolate mousse that looked intriguing. It called for avocado, cocoa, and a natural sweetener, among one or two other ingredients. Nothing objectionable! 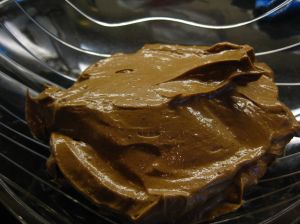 But someone commented that she had found it dense, so I googled “vegan chocolate mousse” and decided to combine ideas from a few recipes, adding a little extra almond milk so it wouldn’t be too dense. I’m writing this today instead of yesterday, because my avocado was slow to ripen.

Of the recipes I found online, this one – from a blog called The Laidback Vegan – was the most unusual. It called for balsamic vinegar and tamari soy sauce to enhance the flavour, and also mask the avocado taste. The description sounded wonderful! Whatever else I included, I would include those two ingredients.

I was disappointed by the result at first, but it tasted much better after being chilled in the fridge for a couple of hours. Maybe it needed time for the flavours to blend, or maybe I shouldn’t have messed with the recipe. I think I’ll have to tweak it next time. I expect more maple syrup would help.

Here’s a link to another recipe I consulted. It’s a Food Network recipe by Giada De Laurentiis. How bad can that be?

And a third, from MindBodyGreen.

And lastly, my own first attempt, below.

As an alternative, I wouldn’t make the recipe at all – I’d eat the avocado on its own, because I like it that way, with a bit of vinaigrette, and I’d enjoy a piece of dark chocolate, or the healthy chocolate treats I made last week, for more serious chocolate flavour.

But it’s fun to experiment.

1. Combine all ingredients in food processor.

3. Chill in fridge for two hours.